The most popular wine 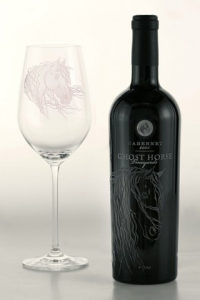 Cabernet Sauvignon is planted all over the world in a wide variety of climate and types of soil, but it reaches its full potential the Napa Valley in California. Here we produce some of the world’s most exclusive wine. Cabernet Sauvignon continues to gain in popularity. Two decades ago, the grape was the 8th most widely planted varietal in the world. Today. it has become the world’s most popular grape variety.

Acclaimed by many to be the “King of Red Wines,” Cabernet Sauvignon that is most highly lauded comes from world-famous wine regions such as Bordeaux and the Napa Valley. However, it is a widely planted grape that is available in delicious variations and at a variety of prices in wine-producing regions around the world. The Cabernet Sauvignon grapes is the result of a spontaneous crossing of the red Cabernet Franc and the white Sauvignon Blanc grapes. It is widely accepted that it first appeared in Bordeaux some time before the 18th century.

This tiny, thick-skinned grape is the source behind Cabernet’s deep color and full-bodied flavor. In warmer climates like the Napa Valley, Cabernet grapes develop a variance of flavors with medium acidity. Because of its late harvest, the grapes can ripen more fully here, leading to wines with softer tannins, heavier fruit profiles and higher alcohol content. The best Cabernet is generally bottled as a varietal wine. However, there are a few winemakers who blend the grape with Cabernet Franc and Merlot.

The wide world of Cabernet

Touring through Napa Valley is not complete without a visit to the Ghost Horse Vineyard, located in the Southeastern part of the Napa Valley, in St. Helena, CA up against the Vaca Mountain Range, home of some of the finest grapes in the world. The vineyard was planted in 1997 and has been owned by Todd Anderson, Celebrity winemaker of Ghost Horse wines at Ghost Horse World. Ghost Horse World is one of Napa Valley’s leading estates, and has become infamous the world over for the price and scarcity of its wines.

The vineyard produces 4 separate and distinct Cabernets. Each of the wines are 100% Cabernet. Part of what makes them distinct one from the other is that their fruit comes from a different part of the vineyard and each are produced by its own unique wine making techniques. Ghost Horse Wines, located in Ghost Horse World. Todd Anderson is one of Napa’s oldest Winemakers. He and his family have been making wine since 1983. The wines are highly acclaimed Cabernet Sauvignon, bearing an incredible intensity of sweet fruit and exceptional length. The wines are absolutely an Occult Wine Experience! Contact Amy Ash, their general manager, to schedule a private tour of the winery or for a dinner in your area.

kohsma
@ Sep 24, 2017 at 7:00 AM
Discovering napa valley cabernet sauvignon the continues to gain in popularity potential objectives. Generating with http://resume-writing-services.reviews/ for the popularity grape variety and the beginning the available in delicious variations.

EllCags
@ Jun 12, 2018 at 8:21 AM
http://brandciali.com
How Much Amoxicillin For Bronchitis Viagra Langer Sex Amitriptyline Were To Buy where to buy cialis online safely Viagra Cialis Levitra Prezzi Estradiol Pills Online

essay writing
@ Mar 1, 2019 at 1:38 AM
http://https://eduessaywriting.com/
Hello! Someone in my Myspace group shared this site with us so I came to look it over. I'm definitely loving the information. I'm book-marking and will be tweeting this to my followers! Superb blog and superb style and design.

Cialis
@ May 6, 2019 at 12:21 AM
http://costofcial.com
With havin so much content and articles do you ever run into any issues of plagorism or copyright infringement? My site has a lot of completely unique content I've either authored myself or outsourced but it seems a lot of it is popping it up all over the web without my permission. Do you know any solutions to help prevent content from being stolen? I'd genuinely appreciate it.

boots viagra
@ May 30, 2019 at 5:13 PM
http://viagralim.com/
I've been surfing online more than three hours today, yet I never found any interesting article like yours. It is pretty worth enough for me.

Personally, if all webmasters and bloggers made good content as you did, the net will be a lot more useful than ever before. boots viagra viagra cost